June 6th - DAY 2. Another day of adventuring under our belts. The weather was mild but mostly high clouds or overcast, though the sun peeked out for a while this afternoon. Not bad at all, just kind of flat light for photography. 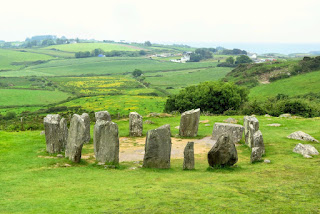 Today we took the R-roads and L-roads, some of which are little more than farm lanes, through the tiny coastal village of Union Hall, a hilly farm countryside where one had to approach bends in the road with care, lest we meet one of the local farmers with their tractors head on. We passed through the even littler seaside village of Glandor, which somehow looked dingier and less romantic than when I saw it last year, and found our way out to Drombeg Stone Circle, surely one of Ireland's most complete Neolithic monuments. Situated out amongst rolling fields and hills of prickly yellow gorse, this was revisiting an old friend from my previous trip. Although the sky was hazy-white overcast, not sunny like last year, the ancient circle of stones is still a place of timelessness and reflection. As before, someone had left a wilting gift of wildflowers at the circle's center, and I also picked a handful of daisies to leave as a token of ... well, I'm not sure what, maybe just saying "I see you" to the shades of those long ago people. More people began to appear and we left. 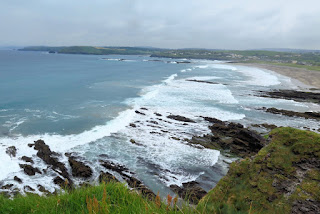 Onward again, we found a lovely stretch of beach that reminded me a lot of Oregon with its black rocks jutting through long swaths of sand. The waves burst in windy spume upon the shore and there I found few seashells, mainly periwinkle. Finally the wandering, twisting country lanes took us through green canyons of hedgerows over to Rosscarbary, where we stopped for a bite to eat. From there we drove on out to Galley Head.

There is a remarkable country to see, a high, narrow plateau of patchwork farmland overlooking the sea. We knew there was a lighthouse out there and eventually spotted it, a toy figure with its white-and-black tower wayyy out on the headland amidst green farm fields. To our surprise, though, public access ended near a scattering of newish houses a half mile more short of the lighthouse. A No Trespassing sign is posted where the road passes through the portal of some high stone ruins. Though the tourism sites about Galley Head don't mention it, there is a much-ruined castle blocking access to the headland. 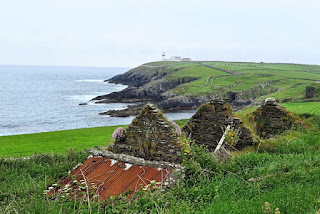 Even more curiously, just beyond the No Trespassing sign I could see two modern houses plunked right in the middle of the ruins. But there's not so much as a single sign or plaque devoted to the history they sat amongst. I had to wonder what artifacts may have turned up when they built those things, and if anyone had bothered to catalogue or save them. Crumbling walls and a broken-toothed square tower are all that remain of this forgotten fortress, but they were picturesque enough and notable enough to excite some remark - and a number of photographs - from me. 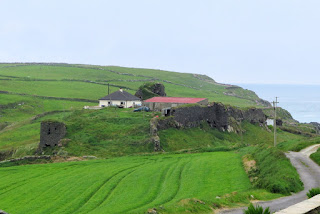 I've later learned the ruins belonged to a Norman castle which I've seen named both Dun Deidi and Barry Roe. However, I can find nothing else about it. There's considerable to be read about Galley Head Lighthouse, its history and the fact the former lightkeepers' houses are now available as self-catering vacation houses. But there seems nothing at all about what once must have been an imposing Norman outpost overlooking a wild gray sea. Writing this two weeks later, I still find that omission sad. 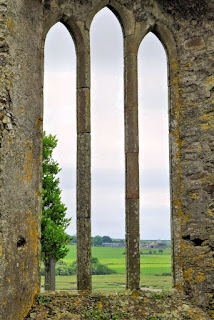 After I'd had my fill of photographs and scenery, we went in search of lunch. Clonakilty looked too busy so we continued to Timoleague - but found it CLOSED due to the bank holiday, not even a cup of tea to be had. However, they did have a ruined abbey, a Franciscan house built circa 1240, which we stopped to explore. Curiously, the locals apparently took over the old abbey as a graveyard starting in the 1700s and continued so until at least the 1990s. Almost every inch of the ruins, barring just one room, was filled with family headstones. So, perhaps appropriating ancient history for more modern usage is just the way things are done.

We at last found lunch at the unattractively-named but charming town of Ballinspittle, another small collection of brightly-painted shops set at odd angles to a village square. (Or maybe village triangle: the proportions in these little places tend to be inexact.) The Diva Cafe was cute, busy and very tasty! From there we made our way Kinsale, figuring we ought to at least give it a look. But just like Baltimore, the town was absolutely PACKED! We noodled around a few shops for maybe an hour as it was a quirky, interesting place, but you could hardly cross the street for all the traffic. So we loaded up and headed on back to camp.

It sounds like a lot but we kept an easy pace and it's been great fun, lots of beautiful scenery and I'm *loving* all the seaside stuff! That was a funny thing, too - apparently everyone goes to the seashore for bank holidays but they're not actually *on* the seashore! The beaches we visited were nearly empty, but the towns were packed and the highway was bumper to bumper with folks coming home toward Cork this afternoon. 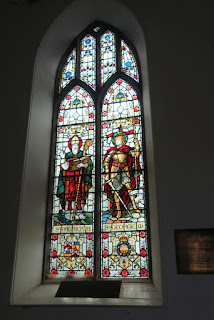 Once back at our lodgings, Celebsul and I decided to clamber the old steps up the hill above our lodgings and visit St Barrahane's Church nestled in the trees up there. Gravestones dating back to the 1700s tilt this way and that along with newer headstones, and a big but nameless crypt stood behind the church. It hadn't really dawned on us to see if the door was unlocked, but some folks showed up also exploring the church and they walked right on in. So, we followed. What a lovely, peaceful place. There were two old gents stood behind us in the aisle having way too much discussion over snapping a photograph, but they didn't stay long. Celebsul and I sat a little space in the cool hush. Magnificent stained glass filled the windows and memorials to parishioners dating back more than a century filled the walls. It was easy to see who the prominent local families of the day were.

Outside again, we wandered among the old graves some more, peered over the fence at the neighboring cows and finally called it a day. 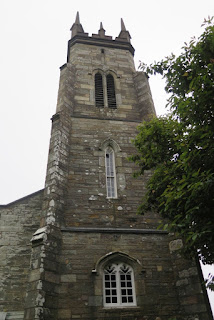 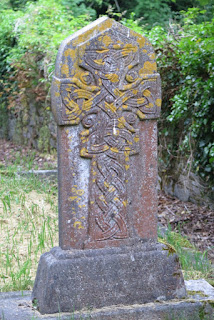