I am such a bad dog mom!!! :( While everyone was eating chocolates and posting pink hearts, my good old dog, Jesse, was having his 14th birthday.

Yup, Jesse turned 14 on February 14, which was Valentine's Day this year. (Somehow I was thinking his birthday was the 17th.)

My, how the years have flown. From the handsome 2-year-old who lived tied to a tree at Reds Meadow Pack Station, until we took him on, to the rather neurotic young fellow who PEED on everything and who, under any perception of pressure while training, would quit the field and run to find the nearest human friend, to the steady good boy who could handle anything from lambs to recalcitrant ewes to silly heifers ... he has been my dog.

If I knew then what I know now, I don't know if he would have made an Open dog. Pro-Novice, sure, but he wasn't about the big outruns and flashy moves. He just wanted to work. Give him a job, show him a task and he soon made it his own. He was a darned good farm dog, a pretty decent cow dog and, over time, he and I got pretty handy at local arena and farm trials. In fact, eventually we started winning them. It wasn't due to my minimal skills: it was Jesse, who knew what I wanted better than I did - even if he didn't always believe that Stop meant Stop. ;)

He's old, now, about 97% deaf and going out in the hind end, and little things distress and upset him. He's happy sleeping around the house all day, but when the sun starts to go down, Jesse wants his family indoors and within his sight, or he barks his protest at full volume. Actually, being deaf, his bark only *has* one volume, now. But that's okay. It also tells us when he's happy, when he's out frolicking with the young dogs and falling on his butt and getting back up again to frolic some more in his tangle-legged, arthritic, bark-barking way.

Jesse is a happy old dog. He has what he always wanted, a place to belong and a family to call his own. He's the last of our old string, the last of the cow dogs, the trail dogs, the dogs who savvied the mountain trials and knew the high country camps. The sands in his glass are starting to run low, but his days are gentle and warm and well-fed. It's going to hurt when he leaves us, but he's raised our puppies and taught ME more than I can ever say.

I do love you, Jesse, you funny old man. Happy belated birthday. 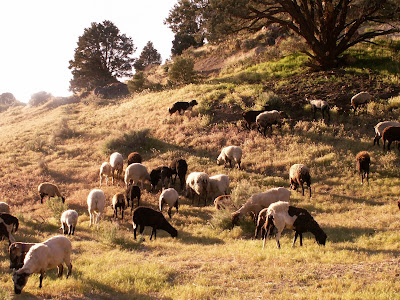 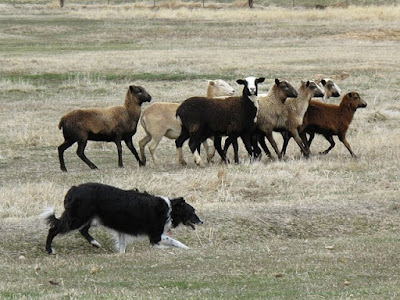