Today we said goodbye to a very old friend - our 17 year old kitty, Josey Wales. His respiration was elevated, he was having trouble eating, he was losing weight - he was wearing out. It was time. He had one last good night snoring on our bed, one last nice morning napping in his favorite patch of sunlight.

Josey muttered his complaints on the ride down to the vet, but apparently he was just indignant about the crate. As soon as I got him out and set a folded towel on the exam table for him, he laid down and made himself right at home. That's all he wanted, the comforts of an old man. He never even noticed the sedative shot and he went to sleep with his head in my hand.

Josey came to me sometime in late 2000. Some truck driver friends of ours stopped by the house to drop off this little orange kitten, (heaven knows where they found him,) saying, "Here, you said you wanted an orange kitty." They left and Josey stayed.

He didn't have a name, of course, but within a day I was mostly calling him, "You little s**t!" He climbed the curtains, tackled the plants, climbed the ficus, knocked books off the shelves - in short order, I named this little outlaw after one of our TV favorites, the outlaw Josey Wales. And he did his best to live up to his name.

But then my hubby came home from working several weeks away, and Josey just freaked. He gave my poor hubby a look of absolute horror and shot off down the hall and under the bed. And that's the way it was for years. Oh, Josey eventually learned to come out and eat and even slink around the room when hubby was present, but my little outlaw had revealed himself as a full fledged scaredy-cat. None of our friends ever saw him, either!

Josey was about 8 years old when he finally decided he would let my husband actually touch him. And then somewhere over the years, Josey decided drama was just too much work and he almost became a normal cat. But only almost. He still never went out hunting, never walked around outside, and indeed, he never got further than 20 feet from any open door. He was a HOUSE cat, dammit, and he reserved his energies for food and naps, followed by more food and naps. 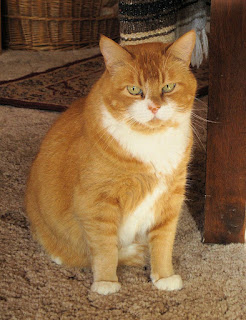 And that was his life. I think it was a good one. He certainly never seemed to want anything more and he raised 17 years worth of puppies with a paw of velvet steel. He will be missed ... but he is no longer sick and fading. And I'd like to think he is over the Rainbow Bridge and reunited with his one true love, our calico girl, Smudge, who left us some 3 years ago.

Good night, little old man. Thank you for sharing your life with us.
Posted by G. M. Atwater at 5:30 PM No comments: