Yesterday we said goodbye to our old dog, Dolly, at 11 and a half years old. In late June she was diagnosed with lymphoma, and the vet gave her 2-to-3 months to live.

The tough old thing stuck it out for five and half.

Dolly wasn't anything fancy. She was a half-Aussie, half-BC, ranch bred dog of no particular lineage, and in those days, we didn't know a thing about formal cowdog training. What a dog naturally had is what we took to work, and that was all.

But if we had a bull sulking in a bog or a cow up on the hill, we could tell her, "Git 'em up!" and by golly, they'd be got. She and her sister, Della, were the one-two punch that saved us and our horses a lot of extra work. When we hired on packing mules for guide/outfitter services, Dolly put her energies to patrolling squeakies up on the rock slides or chasing trout in the shallows, and sniffing out the secret ways of mountain critters.

She was butch, aloof, and independent, and she'd come to us for affection if and when it suited her. If you came to our gate, while the rest of the pack clamored and yelled, she'd stand back and measure you with a wolfish, opaque stare that just said, "Hmm...." One time she fell out of my pickup truck going 60 miles per hour - *broke* her chain whilst lunging at a semi going the other way. But she suffered nothing more than bruises and a bitten tongue. Looking through photos last night, we found it grimly amusing to see how many times we caught her with one of those plastic "satellite dish" vet collars around her neck. But going easy on herself never once crossed her mind.

At the vet's, we asked the doc to come out and administer the sedative in our truck, rather than subject Dolly to the scariness of the vet's office. As the drug began to take hold and consciousness faded, Dolly's last overt act was to growl and snap at her sister for crowding too close. Hardass right up to the bitter end. That's our girl. 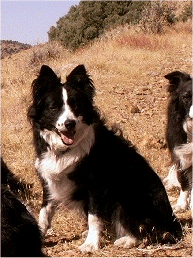 Dolly never set foot on a trial field, or saw the sense in a half-mile outrun. (Put the spurs to that nag, Mom, and come on, help me out.) She had no square flanks and no finesse and nothing you'd call style. Her favorite approach was straight-on at thirty miles per hour.

She was none of those things to which men refer when they speak of the venerable, the great. But to those of us she leaves behind, Dolly was a good ol' dog.

That'll do, Dolly, good girl. Time for you to go on Home. 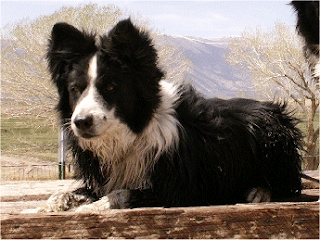 Me and the Pack