.
.Yesterday was our wedding anniversary. 26 years together! It was a pretty darned good day. We went into town, saw some friends and had a very nice breakfast and dinner out. We also bought a few needful things: a vacuum cleaner, some bedding - and a house.

This house. Mountain House. Where we've lived for the past five and a half years.

Yup, the realtor just called and said we are done. We're done? It's ours? Just like that? Shouldn't there be .... I dunno, bugles or drum-rolls or something?

I have never had this. In all my life, I've never had a piece of ground that I could sift the dirt through my fingers and say, "This is mine. I belong here." But now we have just that. This 2.05 acres with the funny little house and all its quirks, from the bedroom door that's older than the house (it has an old fashioned keyhole and a colored glass door knob) to the downstairs room that's probably needed baseboards for 20 years, and the doves and blue jays and sparrows and chickadees, the finches and thrushes, the kingfisher and redwing blackbirds, the coyotes and bears and the pear eating, tree climbing, porch rail walking foxes - even the chicken killing bobcat ... they're ours. Or we're theirs.

And now we can do and fix and rearrange Stuff to totally suit ourselves, because we are our own landlords. That is so freaking groovy. I think I'm gonna celebrate with a cup of tea and a shortbread cookie. Welcome home to us. 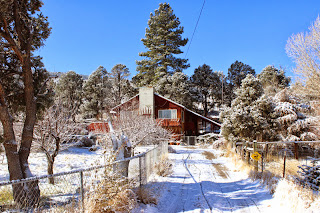 Our Trial Did Not Suck

.
I haven't blogged here since way back last spring, mainly because I'm not very bloggery, but today I have something to say.

This past weekend, our local sheepdogging club, the High Desert Sheep Dog Association, hosted its first-ever sanctioned USBCHA field trial. Very little about the Open trial went as planned and I've winced and cringed and moaned. But now I want to write about it one more time and be done with it.

First of all, our Open handlers are not alone in thinking, "Wow, that didn't go very well." Of our 29 to 30 Open competitors, only 9 or 10 per day walked away with scores. That is absolutely not what we had in mind!

But our trial did not suck. Let me go over this with a few bullet points.