Thoughts By the Side of A Road - Election Day 2012

Today I took my time driving home, stopping often to enjoy the fall colors and look for photo opportunities. I'm stopped to snap some shots of a particularly beautiful stand of golden cottonwood trees when I notice a little old man in a cowboy hat trudging down the road towards me. There's a house a few hundred yards beyond him, so I think maybe it's the owner coming out to growl at me for taking pictures of "his property."


But since it's a gorgeous day and the old fellow has taken the trouble to walk this far, I figure I'll wait for him. He's an odd, wee old guy, shorter than I am under that grey Stetson, and he's also wearing a black, fringed leather "cowboy" coat to go with it.

As he draws near my truck, I come around the back of it to say hello. He gives me a somewhat distracted "hi" and stops, blinking vaguely around him. Okay, so no growling or ass-chewing.

Abruptly finding focus, he looks up at me with a lopsided grin, touches the brim of his Stetson and says, "You like my hat?"

The penny drops. He is a 6-year-old in a 60-year-old's body. I tell him it's a great hat and that he looks very handsome. He grins with mismatched teeth. We're suddenly old friends.

"Did you hear about my brother?" he asks.

For a second I just look at him. I've never seen this little guy before in my life. But in the next beat, I remember that a quarter mile ahead of me is the house of a man who'd been killed, along with his girlfriend, in a head-on collision with a drunk driver a month or two ago. An accident only a couple miles from my house. Somehow we never heard the sirens.

My little cowboy-man then proceeds to ramble companionably about this and that. He tells about his brother's funeral and his brother's girlfriend - "I think they were gonna get married" - and how even their little dog was killed. But people made up a book with pictures and things, about his brother, and he was pleased with that. The girlfriend's family even had his brother's picture at her funeral.

I can't read him well enough to tell if he feels grief as I would know it. Then he looks up at me again.

"Did you know I had a seizure in the driveway?"

Oh, crap. I need to be heading home. But we're standing by the side of the road amidst a few hundred acres of alfalfa, and I do not want to leave a seizure-prone little old boy wandering alone out here.

I then ask if I can give him a ride anywhere, and he thinks for a moment and replies, "Yeah, I'll have a ride."

When I ask where he wants to go, he points off down the road - towards the home of his dead brother.

"My friend is living with me," he says.

So, I move stuff off the passenger seat and he hauls his small self in and aboard. His keys are on a lanyard around his neck, and he points out what gate I should drop him by. He's thankful in the careless way of small children and closes the truck door with a hearty bang. He goes towards the house, the house of his dead brother, where a friend is living with him and keeping him fed and clean.

When he's gone, I notice a penny lying on the seat where he'd been.

Does this story have a point? Probably not. I stop by the side of the road to take pictures of trees, and meet a simple little man whose brother died in an horrific accident not two miles from my house.

Or maybe there is a point. Maybe it's to point out how connected we all really are.

But all that won't matter, when we wake up tomorrow morning, because the "wrong" political party (no matter which one it is) will hold power, and half the country will crying out in dismay. We're connected, damn it. By the finest, most delicate threads. A chance meeting on a rural road can help someone, or leave them dead in a puddle of smoking gasoline.

But it won't matter, tomorrow. In the morning, no matter how the elections go, we'll be a country at war with itself. I hope people will forgive me if I just stick to looking at the world's beauty, at humanity's beauty, and maybe sometimes see if I can reach out to someone alone on the side of the road. 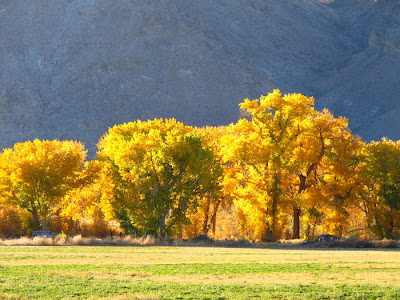