Happy Birthday, Jesse. You are a Very Good Dog.

.
Today is the 12th birthday of my good ol' dog, Jesse. It's hard when the good un's grow old. 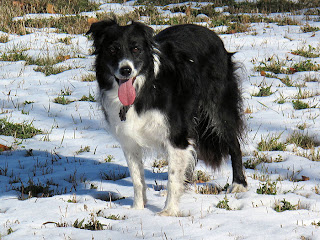 But it's good to look back on our long journey together. We first met Jesse, then known as "Whip," 10 years ago, when we worked one of several summers at Reds Meadow Pack Station. "Whip" then belonged to one of the other mule packers, but sadly spent most of his time tied to a tree. The guy had got "Whip" from the breeder as partial payment on a horseshoeing bill, but this guy really didn't know what to do with an active young border collie. If "Whip" got loose, he just ran. And then he got caught and went back to his tree.

We felt sorry for the poor pooch and soon realized that this was actually a pretty nice dog. A fellow employee's young daughter would take him for walks on leash, and I'd see "Whip" walking perfectly at heel beside this little blond girl, a lovely picture. Someone, thought I, has spent some time with this dog, and it's certain it wasn't his present owner.

Long story short, we finally talked "Whip's" owner into letting us take him, because the guy really had no attachment to or understanding of the dog. In the hand-off, we learned who the dog's breeder was and best of all, we learned his real name: Jesse. The first time we called him by that name, Jesse literally frolicked. You know me, you know me!

And so he came to live with us. Oh, I didn't really plan to keep Jesse. I just couldn't stand to see him living tied to a tree, and anyhow, we already had 4 dogs. Maybe I could find a nice agility or flyball home for him. Right? But when we got back to civilization, I took him to my sheepdog trainer, Sandy Moore, for an instinct test.

"I sure hope he doesn't herd," I told her, just before I went in the arena. "We really don't need another dog."

But Fate had its own designs. Jesse tested brilliantly. Two years old and never having never seen a sheep, he was a natural. Beautiful flanks, lovely shape to his movements ... I looked at Sandy in something like despair, and she laughed at me. She's kept right on laughing for all these past ten years.  ;)

Still, the road wasn't easy. As a rescue, Jesse had some "issues." His previous owner hadn't been fair in his dealings, and it took little to shatter Jesse's confidence. Too much pressure, too harsh a voice and Jesse would quit the sheep and bolt for safety beside the nearest friend. At one point he developed a positive phobia of a certain training field, the cause of which I never discerned, but it was six months before I could get him to set foot back in that field.

It didn't help that I was still struggling to learn the myriad subtleties of stockdog training, and heaven knows the many mistakes I made along the way. The progress we made was, in very large part, due the intrinsic magic of Jesse's heart. He stuck by me, I stayed with him, and together we learned and grew as a working team.

I can't begin to point out the place or time where Jesse became a Very Good Dog. For the longest time, I was surprised by our successes, and even more surprised when we repeated them. In ASCA trials and AHBA trials, and even one USBCHA Novice-Novice trial, Jesse and I brought in the wins. When we weren't trialing, we were stockhandling for trials, and at every chance we helped friends with livestock chores, whether vaccinating lambs or moving cows to summer range.

Somewhere along the line, that unsure, worried dog became my rock, and the dog that folks around me knew they could count on. If a green handler needed someone to outfield their sheep, Jesse was our man. If a cranky ewe or recalcitrant wether needed its nose pinched, a flash of Jesse's teeth did the job. If sheep escaped a young dog's control, I could send Jesse racing off over the ditches and hills to fetch the woolly rascals back.

And somewhere along the line, I think Jesse taught me more than I ever taught him. The measure and magic of a Very Good Dog were my lesson this decade past, and I am blessed to have been the student in this class of one.

Oh, out there in the world of Big Hats, my Jesse may not amount to much. He's never done a 600-yard outrun, never set foot on so much as a Pro-Novice course. I honestly don't know if he would have made an Open dog, at all. His stops aren't great, his outruns are tight, and on his lifts he tends to slice at the top. (All of those a product of my imprecise training.) He's an upright, loose-eyed, not very stylish dog, and his bloodlines aren't remarkable at all. But if you needed a chore done on the ranch or farm, Jesse and I could saddle up and get 'er done. To me, that's  been what counts. 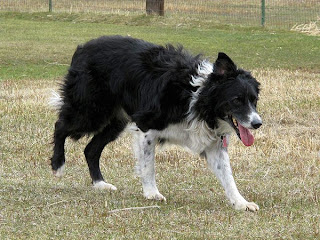 At 12 years old, he still wants to work. He's showing his age, finally, in the grizzling on his face, the faint cloudiness in his eyes, and his hindquarters are getting weak. The chiropractor is also now his friend, given the way he throws himself about with the younger dogs. But he still wants to work, and I still find things for him to do. I'll keep making work for him until he shows me he simply can't.

Because he is my Jesse, my partner and friend, and he is my Very Good Dog. Happy birthday, you funny old man. I love you and I'll love you forever.