I Measure My Life in Dog Years

We acquired Cub as an 8-week-old puppy, while visiting a friend who was Animal Control officer in the tiny town of Bridgeport, CA. He got a call someone found a dog at the dump, but it turned out to be a fat, healthy Australian shepherd pup - with a tail. When the pup cried in her kennel, I took her in my lap where she fell right to asleep. When it came time to leave, our friend said, "Well, you three better go on home."

Cub became our constant companion for the next eleven years. She was beautiful to behold, black and tan with a blue merle collar around her neck, copper on her cheeks and eyebrows, and a glorious plume for a tail. Yet however eye-catching her appearance, (and people often remarked) it was her spirit that shined the most. As a puppy, Cub was silly, happy, and playful. As an adult, she was silly, happy and filled with the joy of life. She could put timid dogs at ease, soothe dominant dogs' anxieties, and she greeted everyone she ever met with a beaming, loose-tongued smile.

This beautiful girl accompanied us on countless miles while we rode cattle ranges and mountain trails. She had almost no skills as a herding dog, but she was a splendid trail dog, tireless and wise, and she did have one great skill. Cub could bark a herd of cows out of a willow thicket like nobody's business, and she wouldn't quit until the last one came out.

We honestly had no idea how extraordinary she was, as a physical type. We thought it normal to ride 15 to 40 miles a day and Cub would not only keep up, but she would almost double the mileage. Yet when we brought her in for vet checks, the vets would sometimes call in their assistants to admire Cub's iron-hard musculature, or the rawhide toughness of her feet. She was just our dog, our partner and pal, who loved playing stick and chasing balls, going swimming, pouncing after fish in the streams, and following the wild trails with us.

In all, Cub lived the perfect dog's life. She never knew a chain, rarely felt a leash, and lived a life of near-total canine freedom on the cattle ranges and amongst the peaks. We lost Cub to illness in October of 1995, and our vet wept with us, as he administered his final mercy.

We got our next dog the following year, ostensibly as a companion for Nikki, the spaniel-border collie rescue we'd acquired along the way, who fell into depression after Cub's passing. Born on St. Patrick's Day, 1996, Della was a Border Collie-Aussie mix from a rancher friend's breeding. Della proved to be a worthy successor to Cub, a delightful personality full of bounce, happiness, and playfulness and she absolutely lived to be with us. She was not much of a working dog, either, but who cared? Della filled our lives with joy and laughter.

However, poor Nikki never recovered from the loss of her mate, and refused to have a thing to do with Della. So, we bought Dolly from the same breeder in 1997, a puppy for our puppy.

Though full sisters, Dolly was Della's opposite in almost every way. The only things they really had in common were parents, pointed ears, and black-and-white coats. Dolly was serious, oh, so serious, and had a poker face, to boot. Oh, she'd play and chase sticks and loved a game of tug-of-war, but she did these things with a powerful sense of competition. Dolly ruled the back of the pickup truck and when strangers came to our gate, she'd stand off and eye them with a cool lupine stare that could mean anything or nothing at all.

As with Cub, Della and Dolly were our companions of the trail, logging innumerable miles in the Sierra Nevada Mountains and on ranches in southern Cali and Nevada. They proved a good team on cattle, a one-two punch that convinced most cows to get a move on, and together, they bolstered each other's confidence. Dolly was tough as an old used boot, one time colliding with Della at full speed, whilst they both went after the same cow. Dolly hit her sister hard enough to crack one shoulder blade, and she tumbled on impact, but came up screaming - mad as hell and trying to catch and eat that cow on only three legs. Dolly healed up just fine, though, and continued on her butch and stoic career.

Della retired herself from herding at about age 8, just lying down in an arena one day when Dolly brought in a group of sheep. Della only worked to please us, not because it was her calling in life, and she thought it much better to stay home and play pampered house pet.

However, our lifestyle changed and we only cowboyed or packed mules part time, and the sisters settled gracefully into retirement. We lost Dolly on December 8, 2008, a victim of lymphoma. The doctors gave her 2-3 months to live. The tough old thing stuck it out for almost 5.

Nor can we forget Rose, my first purebred Border Collie. She was born on Easter Sunday, April 12, 1998, from a nice pair of working dogs owned by our good friend, Chris Rigali. We were packing mules in the Sierras in those days, so Rose kind of grew up like a canine Tom Sawyer, playing with our older dogs, chasing squeaky critters, and rolling in whatever stinky stuff she could find. By six months old, she was going up the trail with us, a little black coyote slinking among the rock slides and flying across the alpine meadows.

I found a sheepdog trainer here in Gardnerville when Rose was about 10 months, but ... I had me a bit of trouble. Our sweet, fluffy, mild-mannered Rose turned out to be a Tasmanian devil on sheep: driven, direct, independent, hard-willed and way too much dog for me. My trainer did the best she could, but I simply lacked the skills to manage a dog as tough and headstrong as Rose. Then at about age 3 and a half, she had a fall, injured her hip - and X-rays revealed she had severe hip dysplasia. She'd held herself together this far by little more than muscle tone and willpower.

Our vet performed a femoral ostectomy, but Rose never recovered to 100%. Eventually, I had to concede that my tough little girl's career as a sheepdog was essentially over. It broke my heart, and I've never shed the idea that somehow, I failed her. I should have been more careful; I should have known something was wrong before she got hurt. But Rose lived out her days as our beloved friend, as quiet and gentle at home as she was hell on wheels with sheep.

We lost Rose to cancer just this June, four months after Dolly.

Now ... we look at one more loss. Tomorrow at 4:00 p.m., we send our sweet, cute, funny little Della beyond the Rainbow Bridge. That's easier to say than that we're hauling her down to be killed. I don't know if it's three deaths so close together, or if it's the fact she's the eldest of the three, but this time is so much harder.

Della is terminally ill. They first diagnosed her with a raging bladder infection, which we treated with medication and she seemed to recover. But within 4 days of finishing her meds, she began a steep decline, and stronger medications have done nothing at all. She's stopped eating, she's lost weight, she's weak, she sleeps 23 hours out of 24, and most of all, our loving little Velcro dog, who yips insistently if we shut her out of our sight, wants nothing but to be left alone. Last night, we brought Della upstairs to bed, but when we started turning out the lights, she just walked outside, went downstairs and spent the night out sleeping under the juniper bush that's become her den.

It's time. She's tired, she's sick, all that sparkle and joy is gone, and she's done. But I'm not ready, even if she is.

Oh, I still have Jesse, my brilliant Border Collie partner, who came to us as a rescue eight years ago and inadvertently filled the void Rose's lameness created. He turned 10 in February and while he's a bit slower these days, he still loves and lives to work sheep. We still have Scruffy, Tye's corgi-border collie rescue who, now at age 9, is pretty much Tye's shadow. Plus, I've young Nick, my gifted, beautiful border boy in whom I've placed such hopes. Further, I've put in for a pup, a full sister to Nick, whom I hope to get in early fall.

But when it comes to Della, I want to grab and hold her and weep into the fragrance of her fur, crying, "Not yet! Don't leave! Don't go!"

This time, for whatever reason, I'm not at all prepared to say goodbye. Maybe it's the history, the miles and the years. Maybe it's that we have loved her so well and so long. There will always be dogs in our life. Since Cub fell asleep in my lap twenty-five years ago, we can't imagine it any other way.

However, Kipling was not wrong when he wrote this verse, which I will leave with you:

We've sorrow enough in the natural way,
When it comes to burying Christian clay.
Our loves are not given, but only lent,
At compound interest of cent per cent.
Though it is not always the case, I believe,
That the longer we've kept 'em, the more do we grieve:
For, when debts are payable, right or wrong,
A short-term loan is as bad as a long--
So why in--Heaven (before we are there)
Should we give our hearts to a dog to tear? 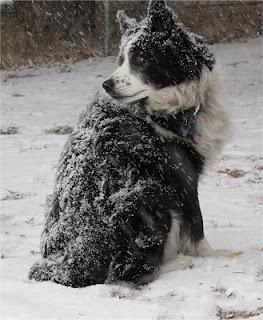 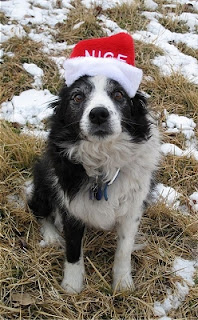